If you’ve read Johnny Graphic and the Etheric Bomb, you know that Johnny’s #1 ghost sidekick is a dead cavalry officer from the First Border War, Colonel MacFarlane. In Johnny’s world, that war was the equivalent of the U.S.’s Civil War. Of course, in our Civil War, the north won and the south remained part of the union. In the fictional First Border War, the south won and the formerly united country broke up into four different countries.

When I was a kid I was such a Civil War nerd that I had Civil War wallpaper in my bedroom–a reproduction of the Vicksburg, Mississippi, newspaper from the town’s famous 1863 siege. One reason I was fascinated with the war was because of man who had lived in my hometown, Duluth, Minnesota. He died there in 1956 at the age of 109 and was one of the most highly honored men in America. Why? 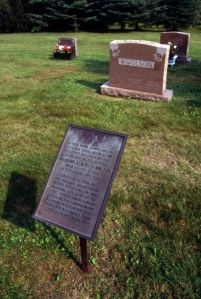 While his father died from wounds sustained at the Battle of Shiloh, Woolson himself never saw actual action during the war. But as a teenager he had been a drummer boy in the First Minnesota Heavy Artillery. He wouldn’t have been much older than Johnny Graphic is during the course of his adventures.

D. R. Martin is a writer and photographer based in Minnesota.
View all posts by drmar120 →
This entry was posted in Uncategorized. Bookmark the permalink.

This site uses Akismet to reduce spam. Learn how your comment data is processed.