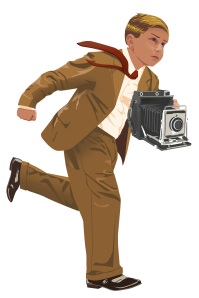 How did the author come up with the idea for Johnny Graphic and the Etheric Bomb? D. R. Martin has always been fascinated by the history and the culture of the 1930s. In particular, it was a golden age for newspapers. Most big cities, in fact, had six, eight, ten major newspapers—all competing with each other. D. R. thought it would be fun to stick a high-spirited, twelve-and-a-half-year-old boy into that world, as a wannabe news photographer. In fact, Johnny’s last name—Graphic—comes from the classic Speed Graphic press camera. Johnny’s Zoom 4×5 is essentially the same camera. D. R. added a bunch of ghost heroes and ghost villains into the mix, and the new fantasy adventure was off and running.

Why is Johnny Graphic’s world so different from ours? Johnny Graphic and the Etheric Bomb is a type of story called “alternative history.” That means the author created another world similar to ours, but different in important ways. For example, in our world, in the United States the northern states and the southern states fought a terrible Civil War over the issues of slavery and states’ rights. That war ended with the victory of the North, and the United States remained a single country.

In Johnny’s world, the southern region won a similar conflict called the First Border War. Colonel MacFarlane and his brigade of horse soldiers were all fatalities of that war. What had been the Free States became four separate nations:

• The Plains Republic, Johnny’s country. • The Old Dominion. • Freedonia. • And the Coastal Federation.

You can see what Johnny’s version of North America looks like here in Johnny’s Geography.

Perhaps the most important difference between Johnny’s world and ours is that things that we find incredible and supernatural are everyday occurrences. The fact that many human beings can see, communicate with, and touch ghosts is a huge dissimilarity.

What is the ether? In Johnny’s world, the ether is a non-material universe that coexists with our own. Ghosts are the spirit remnants of higher animals—including humans—that have throughout the centuries lived and died. But these spirits survive in the ether as ghosts. They are able to show themselves in Johnny’s world but usually are not able to interact with people and material objects. Even though only a small percentage of people and animals become ghosts, there are still tens of millions of them haunting the world.

Why can Johnny and Mel see ghosts but Nina and Uncle Louie can’t? Only a few people in a hundred are born with the ability to see and hear ghosts. Johnny and his sister Mel have that ability, inherited from both their parents. It is believed that the ability to perceive ghosts is a genetic trait that has been passed down through the generations.

Who are etherists? Etherists are people who have the ability to interact with ghosts and recruit them to do various kinds of tasks in the real, physical world. Etherists also help the living to deal with troublesome ghosts. An etherist may be a professional—and get paid for the work—or an unpaid amateur.

What is a “physical etherist”? In our world, we have scientists who study how matter and energy behave. They’re called “physicists.” A physical etherist, like Johnny’s sister Mel, is a scientist who studies how and why ghosts are able to function both in the ether and in the physical world. Scholars such as Mel and Dame Honoria firmly believe that there are rational, scientific explanations for the phenomenon of ghosts.

How can ghosts do physical labor and otherwise interact with the physical world? Normally, a ghost could not move a broom or lift a teapot, like the ghost housekeeper Mrs. Lundgren does. But if a ghost is asked to perform such tasks by an etherist like Melanie Graphic—or some other living person who can perceive ghosts—that ghost will gain the capacity to do real work in the physical world for as long as the living person is alive. It also means that the ghost can perform tasks that are not work—such as the colonel and his men playing poker with real cards and real chips. The ghost, however, must agree and has the right to withdraw from this agreement at any time.

How can a ghost from the Steppes understand what an English-speaking girl is saying? Just as the reasons why a ghost can move physical objects are not known, the reason for the ghosts’ ability to be understood by any other ghost or living human has not been discovered. But the fact remains that any ghost can talk to any other ghost or human and be understood perfectly, regardless of native tongue. Ghost animals, such as Colonel MacFarlane’s horse Buck, remain animals and can only communicate with humans in the normal ways.

Can living animals see ghosts? Just as in the case of humans, a small percentage of animals are able to see and hear ghosts.

When did ghosts start to exist? Just as the origin of the genetic traits that allow living people and animals to perceive ghosts is lost in the mists of history, the origins of the phenomenon of ghosts is similarly unknown.

Why does Johnny sometimes call Nina “Sparks”? In the early days of two-way radio, radio operators on steamships and other vessels were nicknamed Sparks because of the electrical nature of their equipment. As a passionate radiowoman—capable of handling both voice and Morse code communication—Nina earned that nickname.

Will there be more Johnny Graphic adventures? Yes, there sure will be. The second book in the trilogy, Johnny Graphic and the Attack of the Zombies, is now available as a Kindle e-book and as a paperback. In it, our intrepid young lensman travels across the Lesser Ocean to battle zombies and ghosts in the Royal Kingdom.