As a news photographer, Johnny Graphic can only be called a prodigy. He does something on a professional level at a young age. In the real world, of course, this sort of thing doesn’t happen very often. But since the world of Johnny Graphic and the Etheric Bomb is my world, I can do just about anything there that I want–so long as I’m consistent. And I say that Johnny is a crack news lensman. So there.

Also, there’s a bit of envy involved. I was very impressed by the photographers at the newspaper where my grandfather was a sports writer. I vividly remember when I hung out in the photo department as a teenager. It was the first time I really remember smelling those unmistakable darkroom chemicals. And it was one of the things that gave me the photo bug. I knew I wanted to be a photographer. But they weren’t hiring kids, unlike the Zenith Clarion. So I undertook my own assignments as a street photographer. That means I simply photographed life on the street–people coming and going and living their lives.

Here’s one of the early shots that I took, of a mother and her sons at a downtown parade. Nobody looks too excited, but they do look real. 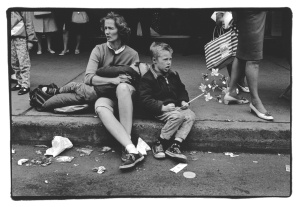 My particular inspiration for pursuing this kind of photography was the Frenchman Henri Cartier-Bresson. I tried really hard to imitate his style of street photography. I was never as good as him, but I’d like to think I did a decent job for someone so young. Here’s where you can see some of his famous pictures.

From time to time, I’ll post more of these shots from my youth.

D. R. Martin is a writer and photographer based in Minnesota.
View all posts by drmar120 →
This entry was posted in Uncategorized. Bookmark the permalink.

This site uses Akismet to reduce spam. Learn how your comment data is processed.